A Closer Look at Tobacco Production

Every cigar smoker knows their cigar is made from tobacco, and most know at the very least the geographic region their tobacco comes from. But there’s more to tobacco than just the country of origin; here’s a closer look at tobacco production.

Tobacco is grown all over the world, although the majority of tobacco used in cigars comes from Central America, Dominican Republic, and Cuba. Sometimes seed tobacco from one area is grown in another, as when you see a cigar labeled ‘Cuban seed’. This term also applies to heirloom seeds from plants originally from Cuba. 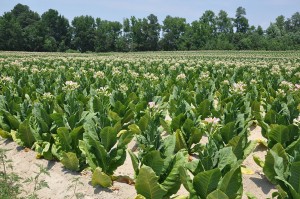 Tobacco seeds are usually germinated in a covered frame, to protect them from pests and offer the highest yield. The sprouted seeds are then transplanted to the fields at the start of the rainy growing season.

There are numerous ways tobacco is harvested, both by machine and by hand. Sometimes the entire plant is taken and processed, and other times the plants are pruned by hand, with ripe leaves being taken and others left to mature.

After the plants are harvested, they must be cured, in one of four ways: air, fire, flue or sun. Almost all cigar tobacco is air-cured. Curing changes the color of the leaves but more importantly, the flavors. Leaves can be aged for months at a time to reveal complex flavors.

After the curing process, leaves are bundles into bales, divided by quality (or type) and sold. Some high quality cigar makers are vertically integrated, so they oversee the tobacco from seed to finished product.

A fine cigar isn’t just a random plant stuffed into a tube- it’s a work of art that took a lot of work and craftsmanship to complete. If you’d like to experience some of this handiwork firsthand, stop into our shop today!