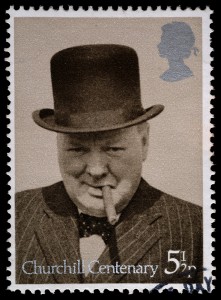 Cigar smoking is one of life’s simplest pleasures. It’s an easy way to unwind and relax, while enjoying a meditative smoke. Some of (recent) history’s greatest minds have been cigar enthusiasts, and in this blog we’ll take a look at one of the most revered: Sir Winston Churchill.

Winston Churchill held many offices in Britain, but he is most fondly remembered as the Prime Minister of the United Kingdom during WWII. When former Prime Minister Neville Chamberlain resigned at the start of the war, Churchill was appointed, and quickly established an attitude of ‘No retreat, no surrender.’

Churchill was a leader of the people, and very popular from his rousing speeches. In his first speech to a nervous country suddenly at war with Nazi Germany, Churchill said, “I have nothing to offer but blood, toil, tears and sweat.”

An avid cigar smoker, it’s estimated Churchill went through an average of 8-10 cigars a day, and stockpiled thousands for his use. He loved cigars so much that when he took a flight in a high-altitude plane that required the use of oxygen masks, he devised a special mask that allowed him to smoke cigars through a hole in the mask. That’s some serious cigar dedication.

There is an unproven legend that when meeting with foreign heads of state, Churchill would insert a straightened paper clip into his cigar to keep the ash from falling and unnerve the other man with the distractingly long ash.

Like many a cigar aficionado knows, Churchill knew that cigars pair well with a nice drink, and frequently paired his with scotch and brandy. Cigars can be a sort of ritual, and Churchill’s enjoyment was no exception, He had a very particular method of lighting his cigars by poking a draw hole using the end of a match, and his favorite ashtray even traveled with him inside its own suitcase.

Today Churchill remains one of the most popular Britons in history, and his legacy as a leader is among the greats. Reflecting on his life is a reminder that even when doing great things, such as leading your country through WWII, there’s still time to enjoy a fine cigar.