Here at Cigars on 6th we’d like to begin a regular blog series on cigar producing countries, giving a brief overview of the history and current activity of these regions.

This week we’ll begin with one of the best-known regions for cigar production: the Caribbean. We’ll focus specifically on cigar production in Cuba and the Dominican Republic.

Cuban cigars are undoubtedly the most well-known and sought-after cigars in the world.

Due to our trade embargo with the Cuba, Americans are precluded from the privilege of buying Cuban cigars (though they’re available in Canada and Mexico).

Even though purchasing Cuban cigars is illegal for all U.S. citizens, according to this piece in the New York Times, JFK wanted to exempt Cuban cigars from the embargo, but cigar-makers in Tampa, Florida objected.

In Cuba, all cigar production is controlled by the government. Because of this, many of the country’s best cigar makers moved to the Dominican Republic or other parts of Latin America after the Communist Revolution.

However, Cuba’s cigars and cigar production are still excellent. Cuban cigar rollers (torcedores) are considered to be some of the best in the world, promoting the art of hand-rolling cigars. 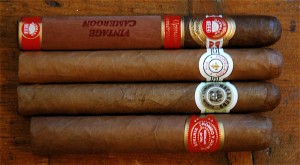 When it comes to cigars, the Dominican Republic produces the most variety at the highest quality in the world.

The Dominican city La Romana boasts the biggest hand-rolled cigar factory in the entire world, and the capitol, Santiago, also boasts its share of cigar factories (and museums).

Who’s your favorite Caribbean cigar maker? Do you think Cuban cigars are still the best in the world?

For more information about cigar making: