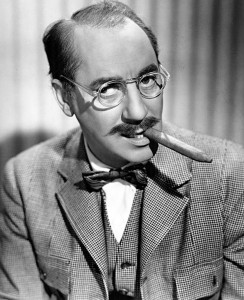 Cigars aren’t just common tobacco products like cigarettes, they’re handmade works of art, and while you wouldn’t profile a historical cigarette smoker, we like to offer profiles of famous cigar smokers from time to time. This month it’s Groucho Marx, one of America’s most influential comedians.

Born Julius Marx in New York City, 1890, Julius was the third Marx brother, and originally planned to become a doctor until the family’s finances forced him to drop out of school at the age of twelve and start taking menial office work. His mother groomed him and his three brothers to become a vaudeville singing group called ‘The Four Nightingales.’

The family moved to the midwest so the Four Nightingales could tour, but one night in Texas, after another terrible show, the brothers began cracking jokes to one another on stage, and found the audience loved the jokes a lot more than the singing. The brothers quickly became vaudeville comedians, and grew in fame, moving back to New York City to establish themselves as the iconic Marx Brothers characters they would play in Hollywood.

Groucho Marx made 26 movies, and created his wisecracking, cigar-chomping character that continues to influence comedy decades later. In fact, the traditional ‘glasses and mustache’ disguise that you see in many costume shops is also known as ‘Groucho Glasses’.

Groucho was rarely seen without his trademark cigar, and has a famous cigar quote erroneously attributed to him. Popular legend has it that when Groucho was hosting the hit radio program ‘You Bet Your Life’, he was interviewing a woman with nine children, and when he asked her why she had so many children, she said, “I love my husband.” Groucho replied, “I love my cigar, too, but I take it out of my mouth once in a while.” It’s a great line, but apparently invented. Groucho himself said later in life that it was falsely attributed to him.

If you want to finish off the perfect Groucho Marx costume this Halloween, stop in and pick up one of our fine cigars!