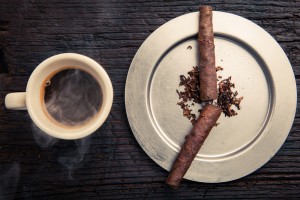 It’s no secret that cigars pair well with a nice scotch or bourbon, but the depth of flavor pairing goes far beyond liquor and beer. In fact, you can pair a cigar with one of everyone’s favorite non-alcoholic beverages- coffee. Here’s a little more information to get you started.

Just like cigars, coffee can run from the low-end gas station degreaser to high-end works of agricultural art. A fine cup of coffee has the same tasting notes as cigars, wine, and scotch, that reward those who go looking for them. And just like those drinks, you can pair those tastes together with fantastic results.

The three primary factors in a cup of coffee are the region it was produced, the roast, and the method used to brew it. This blog doesn’t have the space to fully delve into the world of coffee, but exploring different growing regions is a great way to uncover your preferences. As a quick primer: Many African coffees have bright citrus or floral notes, while southeast Asian coffees can be bolder and roasted dark to bring out their heavy chocolate and earth tones, with Central and South American coffee usually coming in somewhere in between, neutral and mild.

You wouldn’t toss some Johnnie Walker Blue into a glass with Diet Coke, and you don’t want to treat a great coffee with the same disrespect. Brewing methods can greatly affect the flavor profile and acidity of your coffee, and once you drink coffee brewed through a Chemex, you’ll never want machine drip again.

So the next time you’re having an afternoon cigar, try pairing it with a cortado, cappuccino, or French press of your favorite coffee. We have an entire humidor full of worthy cigars for your pairing, so stop in and browse today!