What Is Shade Grown Tobacco? 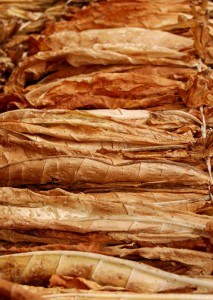 There are numerous types of tobacco used in cigars, with each seed variety and growing method affecting taste and texture. As you browse cigars, you may encounter shade grown tobacco and not know what that means, so here’s a quick overview of this growing process.

When most people think of cigar tobacco they think of the tropical Central American regions that primarily produce it, but tobacco has been grown in North America since the American Indians grew it as early as the 1600’s. The fertile Connecticut river valley is one of those regions that has been producing fine tobacco for centuries.

Shade grown tobacco, more formerly known as Connecticut shade grown, is tobacco grown in the Connecticut river valley. The tobacco is grown inside tents to shade it from direct sunlight, giving it a lighter color and thinner, more flexible structure perfect for wrapping cigars. The average cigar buyer places a lot of importance on the exterior appearance of a cigar, since they can’t experience the taste without lighting one up, so these quality wrappers are in high demand.

Connecticut shade grown tobacco refers only to tobacco grown in the Connecticut river valley, however, Connecticut tobacco seed can be grown anywhere tobacco is produced. Make sure to distinguish between the two if you’re looking for shade grown.

We have a wealth of cigars in our humidor, and are always happy to answer any questions you might have, so stop in to our shop on 6th avenue today!