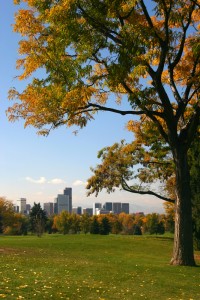 As summer dwindles down to a close and fall begins, you still have some time to enjoy a cigar outdoors before the winter chill sets in. Denver’s metro area has more than 200 parks, many of which are a great spot for enjoying a cigar and watching the seasons change. Here are a few of our top picks for metro area parks worth a stroll, along with their approximate entrance.

Washington Park, Downing and Exposition. Perhaps the crown jewel in Denver’s park system, Wash Park has been around since 1899, and is designated as one of the ‘Great Public Spaces in America.’ There’s a beautiful boat house with paddle boats for rent, if you want to enjoy a smoke during a lap around the big lake. Wash Park has two lakes with plenty of benches, as well as a beautiful lawn bowling green. There are several walking trails that border the park, if you want to take a 2-mile stroll on pavement or off-road.

City Park, York and 23rd. Denver’s largest park is also one of her oldest, established way back in 1880. You can stroll along Ferril Lake, (which also has paddle boats for rent) and admire the Spanish-style architecture of the boat pavilion. If you walk to the east side of the park near the Museum of Nature & Science, you’ll get an iconic view of the Denver skyline when you look west.

Cheeseman Park, 11th and Humboldt. Originally a cemetery, the city of Denver converted it into a park as the city erupted around it, but there are likely still bodies under the manicured lawns! Cheeseman is a great walking park, with plenty of shade around the outside trail. You can stroll by the Cheeseman Pavilion, which is another iconic Denver landmark. This park is only about a 15-minute walk up from our shop!

Belleview Park, Belleview and Windermere. Well worth the trip down south in Englewood, Belleview Park has plenty to do. There’s a small-scale train that will take you around the perimeter of the park for a buck (probably no smoking on the train), but it’s a fun little trip. There’s a small petting zoo, and perhaps the best feature: a shallow creek which winds down the middle of the park. It’s perfect for walking along (or in) and exploring the park.

Do you have a favorite park for enjoying a cigar? Let us know on our Facebook page!