A History of Cigars 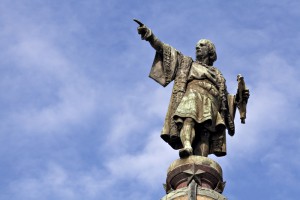 Cigar smoking is a storied pastime, with rich lineages that stretch back for many of the families who produce cigars, but for how long? Cigars have been around a long time, and were actually paired with another notable discovery.

The discovery of tobacco is, coincidentally enough, erroneously credited to Christopher Columbus, along with his ‘discovery’ of the New World. Two of Columbus’s crewmen picked up the practice of smoking crude versions of cigars from natives of Hispaniola, although it’s uncertain how long cigars had already been around in what would later be named Central and South America. 10th-century Mayan pottery shows someone puffing on a bundle of tied leaves, so they had been around long before Columbus stumbled upon them.

Once Columbus brought tobacco back to Europe, it caught on quickly. Jean Nicot, the French ambassador to Portugal, is credited with bringing tobacco to France (and where Nicotine got its name). Sir Walter Raleigh is credited with bringing tobacco to Great Britain. Tobacco was primarily used in pipes and as snuff instead of cigars, although they grew steadily in popularity.

Part of the reason for Cuba’s longstanding relationship with cigars is that the fertile climate let all the components of a cigar be grown there. Cuba was the primary exporter of tobacco and cigars to Spain, where it was then shipped all over the world. This helped Cuba earn their reputation as the cigar capitol of the world.

Cigars enjoyed a boom in popularity worldwide for centuries, eventually overtaken by (what some might consider) the more convenient cigarette in the 20th century.

Today cigars enjoy a solid status among enthusiasts in the U.S. and the world abroad, despite increasing anti-smoking legislation. Fans of a great cigar a thousand years ago and today know that there are few things in life better than kicking back and relaxing with a solid smoke.