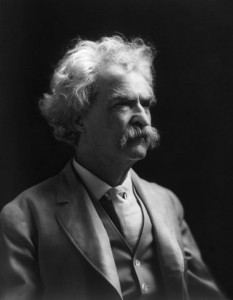 From time to time in our blog we like to profile historical icons who also loved cigars. It’s a reminder that cigars don’t just have to be for kicking back and relaxing, but also as an accompaniment for greatness. In this week’s blog we look at one of the most iconic American authors of all time, Mark Twain.

Born Samuel Clemens in 1835, he adopted the pen name Mark Twain after becoming a steamboat pilot on the Mississippi river. The term ‘Mark Twain’ was a measurement depth yelled out by boat hands that meant two fathoms.

Twain wrote poetry, short stories, and non-fiction essays, but he is best remembered for his classic novels such as ‘The Adventures of Tom Sawyer’ and ‘Adventures of Huckleberry Finn’, the latter of which is considered one of the rare ‘Great American Novels.’

If there was one thing that could be credited to his prolific output, it was definitely cigars. When he took a break from smoking cigars he suffered a crippling writer’s block. His style of smoking, in his own words: “I smoke with all my might, and allow no intervals.” Twain not only loved cigars, but inexpensive cigars that he was constantly puffing on. He had numerous boxes of expensive cigars given to him as gifts, which he saved for guests as he enjoyed his cheap sticks.

Perhaps no figure in literature has generated as many quotes as Mark Twain, who gave us such gems as “Heaven for climate. Hell for company,” and “Golf is a good walk spoiled.” Twain also had some great quotes on cigars as well, like these: “If there are no cigars in Heaven, I shall not go,” and “I smoke in moderation. Only one cigar at a time.”