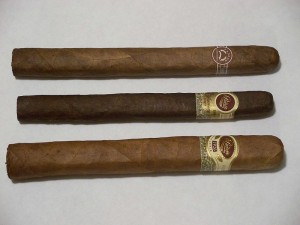 Most cigars are part of a time-honored tradition with rich histories, and from time to time we like to shine a spotlight on these manufacturers. In this blog we look toward Central America, to the Padrón family in Nicaragua. If you’re already familiar with the Padrón brand, perhaps this will shed a little light on their history, or turn you on to their excellent cigars for the first time.

Padrón cigars are produced by Pilato Cigars, Inc, which is a privately held company run entirely by the Padrón family. The company is notable for being vertically integrated, with the family overseeing production from top to bottom. They do not employ a salesforce, and handle all client needs in-house.

The ‘official’ logo for Padrón cigars is a hammer, and the story goes that in 1962, Jose Orlando Padrón fled Cuba to Miami, and had a dream of one day opening a cigar factory. He was given a small hammer as a gift, and then used that very hammer to work as a carpenter and save up the money he used to finally build his first cigar factory and the Padrón brand in 1964.

Jose started the company in Miami, but soon moved it to Nicaragua for the ample tobacco supply. When Ronald Reagan declared an embargo against Nicaragua in 1985, the Padrón company had to scramble to move their operations back to Tampa, Florida within the 5-day window before the blockade took effect.

Today Padrón cigars are made entirely in Esteli, Nicaragua. The company offers three different sub-brands of cigar: the regular Padrón series, the 1964 Anniversary Series, and the 1926 Serie, in honor of company founder Jose’s 75th birthday.

Padrón cigars are an excellent choice for both the seasoned and new cigar smoker, with complex (but not overly so) flavor profiles, and some inexpensive options if you want to try them out. See why the company’s motto states: “When Padrón is on the label, quality is a matter of family honor.”