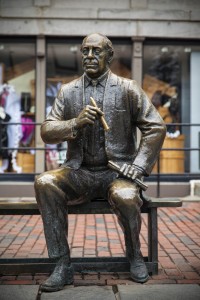 Throughout history there have been plenty of notable cigar enthusiasts who, in addition to being exceptional people, were also fans of a great smoke. From time to time we like to profile these icons and perhaps give you a little backstory that you may not have known. In this blog we look toward Boston and the legacy of Arnold “Red” Auerbach.

Red Auerbach coached in the NBA from 1949 until 1966, primarily with the Boston Celtics. During Auerbach’s dynasty years from 1956-66 the Celtics won nine out of ten NBA championships, including eight in a row. Auerbach emphasized defense and capitalizing on other teams’ mistakes over flashy offensive play.

During his tenure as an NBA coach smoking was allowed inside sporting arenas (for some of you youngsters this may seem hard to believe), and plenty of coaches smoked cigarettes on the bench. Auerbach took it up a notch and began smoking a ‘victory cigar’ when his team had the game on lock. His cigar brand of choice was a monstrous Hoyo de Monterrey, and his smoke infuriated both opposing coaches and the NBA brass. With the game put away, Auerbach would sit on the bench, puffing contentedly.

After serving as coach, Auerbach became the Celtics’ general manager from 1966-84, and then as the team’s President and Vice Chairman until his death in 2006 at the age of 89. Auerbach is remembered with a team award, given to the player or coach who best embodies what it means to be a Celtic.