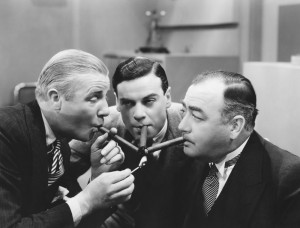 Though it is much less common today than it used to be, handing out cigars at the birth of a child has been a long-standing tradition in the United States and Europe.

Unfortunately it is unclear exactly when the tradition began, but it is believed that it originated with the birth of a son, when fathers handed out cigars (which were a rare and expensive commodity) to celebrate the blessing.

Also, because men used to be excluded from the birth process, after the baby was born men would celebrate with their friends and relatives in the parlor or other room in the house by smoking cigars. Occasionally women were included, but traditionally it was a male custom.

While fewer people smoke today, giving out cigars at the birth of your child remains a fun way to celebrate with your friends the new joy in your life. Come talk to us in person and let us help you pick out some cigars to celebrate your baby’s birth!